Early in June this year, people with interests in marine social sciences gathered at The University of Queensland for two exciting events to establish and launch the newly-formed South East Queensland (SEQ) Marine Social Science Hub. The SEQ hub is part of the Australian chapter of the global Marine Social Science network and was instigated by researchers who realised there was a need for regional hubs in a country as vast as Australia.

The first event, a Research Symposium, brought together marine social scientists across SEQ to get to know each other and the work we do. The event was well attended by researchers from The University of Queensland, Griffith University, Queensland University of Technology, University of the Sunshine Coast, CSIRO, Healthy Land & Water, the Queensland Government’s Office of the Great Barrier Reef and the Department of Environment and Science, and others. 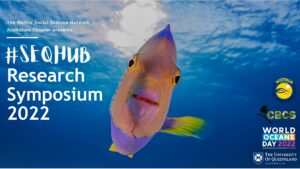 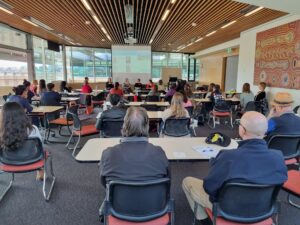 World Ocean’s Day (8th June) was the perfect date for the second event, a Public Showcase, which was held in partnership with the UQ Art Museum. The Art Museum is currently hosting the multi-year Blue Assembly project that explores people’s relationship with the ocean, and is underpinned by scholarly research across multiple disciplines. This focus, along with the UN World Oceans Day theme of Revitalisation: Collective Action for the Ocean set the scene for a full day of discussion and reflection on current issues in marine areas of SEQ. The UQ Media and Production Services team from the School of Communication and Arts were on board to film the event, providing a valuable record of the day. The links below will take readers to the recordings of each session.

After introducing the Public Showcase, Jacquie Chlanda (Education Manager, UQ Art Museum) welcomed Dr Daniel Dunn (Director, CBCS), who gave and insightful and entertaining talk about the value of the social sciences, from a natural scientist’s view. Jim Walker (Lecturer, School of Earth & Environmental Sciences, The University of Queensland) then led an important discussion with Indigenous panel members (Mibu Fischer, Dale Ruska, and Michael Aird) on Indigenous perspectives on “engagement” in research. The feedback on this panel was overwhelmingly enthusiastic, with one participant describing it as the most useful thing she has been to in a long time. 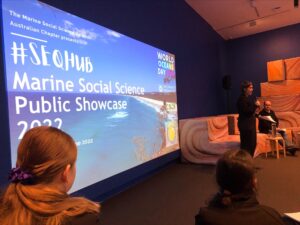 Griffith University’s Associate Professor Kerrie Foxwell-Norton led a panel conversation with women in marine conservation, which explored the panellists’ experiences, ways of looking at the world, and stories of their work to protect marine environments. Attendees were then taken on a tour of the exhibition in the Art Museum, and listened to a talk by two of the exhibiting artists, Sanchintya Mohini Simpson and Isha Ram Das (these sessions were not recorded).

In the afternoon, the focus turned to research, with 8 fabulous marine social scientists giving the audience a taste of what they do through 5 minute speed talks. To finish the event, the Queensland Chief Scientist, Professor Hugh Possingham, officially launched the SEQ Marine Social Science Hub and attendees enjoyed the celebration and networking into the evening.

The SEQ Marine Social Science Hub would like to extend their deep gratitude for funding and support for these events, which came from the Centre for Biodiversity & Conservation Science, the UQ Art Museum and their staff, Jim Walker (SEES, UQ), the organising committee, and the numerous volunteers who made it happen.

For anyone interested in joining the network (whether you are a marine social scientist, or not), please visit our website and sign up for the email list. We look forward to growing this network and continuing to connect people with interests in marine social science.